This phrase, the black sheep of the family, is commonly used to describe the odd one out in a manner that can have rude connotations. As someone who is indeed, the weird one in her family, I’ve taken this phrase and owned it. To be the black sheep is to also be unique and intriguing in an endearing, rather than off-putting manner. When I use this phrase to describe Chile, it’s done with a lot of love.

But just like me, this place is super weird, and unexpectedly so when compared to the rest of South America. From its advanced economic development to its food and language, the country stands in sharp contrast to its neighbors. What I’ve experienced here is not at all what I had in mind when I first arrived at the end of July.

This is not random happenstance though that the country is marching to the beat of its own drum. Chile is a long strip along the continent of South America that has everything you could imagine. There’s a huge range of climates, with different pockets of subcultures going down through the country. People identify with their region maybe more than the country itself at times. On one side is the Pacific Ocean, with the other lined by the Andes Mountains. The driest desert in the world, the Atacama, separates the North from Peru and Bolivia, while the bottom of the country is as close to Antarctica as it gets. It’s fair to say Chile is geographically isolated, functioning nearly as an island.

Does this sound like any other country you know? HMMMMM maybe a country that’s also quite geographically diverse, basically a giant island isolated from other countries, where people identify potentially more with their region than the country as a whole? I’ll give you a second. I feel strange comfort, and slight unease at times when I notice the similarities between Chile and the United States. These parallels are partially circumstantial for reasons outside of human intervention… but also because other countries have impacted the Chilean way of life through direct actions, including the United States.

If you’re unaware of Chilean history, let me explain a brief period roughly fifty years ago.

The leader during the period of major economic development in Chile was Augusto Pinochet. He was, by no means, a democratically elected leader. I don’t want to get too deep into the weeds of this political matter, but Pinochet’s time as a dictator (a term for Pinochet that’s even debated within the Chilean population) probably helped further the country’s “oddness.” After the Chilean people democratically elected a socialist president, Salvador Allende, Richard Nixon placed a trade embargo on the country, famously saying “make the economy scream.” The CIA bolstered the leaders of the military in opposition to Allende through media campaigns and blatantly meddled in government affairs, leading to a coup d’état (which the CIA was aware of) in 1973 that established Pinochet as the dictator of Chile for the next 17 years.

In that time, he significantly opened the economy by welcoming foreign investment and selling off government run entities. The countries natural resource companies, railroads, and airlines were sold. Huge shares of electric companies were sold off to foreign investors. A lot of these decisions were molded in the image of American free-market policies, with a firm backing from the Reagan government. Chile’s economy and political future were molded from the outside in, despite its isolation from the world. Free market capitalism was a seed that was sewn, grown, and cultured for better or worse. Meanwhile, alongside this economic growth was extreme oppression of expression and civil liberties. People in support of the socialists and communists were exiled, tortured, and disappeared. It was a harsh, divided time in the history of the country that still is evident today when you ask someone how they feel about the dictatorship and they think you’re insane for using that term.

People refer to Chile as the most “developed” country in South America as a result of all these changes. Economic development here has made things incredibly expensive though, and also strangely westernized. I question every day how there can be so many billboards and advertisements with tall, slender, white figures and English words when the population clearly does not relate to either (only 3% of the population of Chile speaks English). A lot of the same exact products I buy in the United States I can find here for the same price, or usually more expensive. Certainly some products are cheaper, but things that shouldn’t cost an arm and a leg, like energy, food, and water, are really expensive and this hurts Chile in some pretty blatant ways (more on this in another post).

This country is a capitalist haven, and yet there are open communist gatherings in the town plazas. Chile is NOT the United States, no matter how oddly similar the two are.

Chile’s strong connection to indigenous cultures and their people, but also the environment is so contrary to the Eastern U.S. The country does have a singular culture with national pride and some amazingly friendly people. Chileans love to spend all their time together, even if they’re doing absolutely nothing but sitting on their phones and laptops. They share everything; it’s rude if you don’t share whatever you’re eating with the rest of the people you are with. Can you imagine in the U.S. someone walking around a study room offering everyone some potato chips simply because that’s the polite thing to do? I’d love to make this a normal thing in the U.S.

Chile’s state of isolation has changed. Without the technology we have currently though, I can’t imagine trying to make it into this country. Imagine attempting to cross mountains or the desert to bring goods and products here to sell. Trade was likely incredibly difficult because of the geographic boundaries, so Chileans make use of what their country provides for them, with little outside influence from neighbors; however, of course, excluding the influence of European colonists who came to stay predominantly in the late 19th century.

Being a food blogger, I was most surprised by my perceived vision of Chilean food versus the reality. Honestly, I feel ignorant for my assumptions, but wouldn’t you think that there are a lot of similarities in foods from neighboring countries? I didn’t think about something though…

I’ve actually NEVER seen a Chilean restaurant in Maryland or D.C. I’m not sure if I live under a rock, but think about it. Have you seen one? Is Chilean food a common thing you can find being “reinvented” in NYC by trendy upcoming chefs? Not even.

Beans, corn, diverse grains, and Colombian coffee aren’t staples here. Those rich flavors of chocolate and vanilla from up north towards the equator don’t populate the sweets and treats of Chile. Their food, at least in central and southern Chile, is heavily centered on meat, bread, and few vegetables. Pastries here are frequently fried, cakes are on the dry side, except for the kuchen, a short-layered tart with fruit and sometimes cream (which is likely only in my area in the south as it’s not actually Chilean but German). Dinner, termed “once”, like the Spanish word for eleven, is usually bread with avocado. That’s right, I eat avocado toast each night for dinner, so I guess things aren’t that different.

I’d like to go into more detail about this in another blog post because it’s just so incredibly interesting what Chileans eat, and I have some theories as to why.

When I arrived in Chile, I nearly thought I’d wasted eight years of my life trying to learn Spanish to no avail.

I’ve realized though , Chilean Spanish is basically a different language compared to the rest of the Spanish speaking world. I studied abroad in Spain, meaning I studied old Spanish. Nothing could have prepared me for this. Just like Americans, Chileans speak incredibly fast and with lots and lots and LOTS of slang. They even have a name for their new constructions of language: Chilenismos (also modismos and simply just new words we don’t even have in English). These on their own deserve blog posts because there are just so many. Their accents cut off the “s” sound at the end of most words. Instead of “mas o menos,” they say, “ma o meno.” I must admit, it adds a certain rhythmic quality to their speech patterns.

I’M SORRY if you don’t speak Spanish maybe you won’t care about this, but I must share: What annoys me to no end is their use of verb conjugation for vosotros, because they also cut off the “s.” Instead of saying “como estas” they say “como estai”and they do this with so many other verbs. I’m constantly confused and honestly, I don’t want to start speaking like this because literally no one else in the world speaks like this. Of course, I still love to say what’s up to my students in this very Chilean way.

It can be entertaining and exciting to learn how to speak like a Chilean, and at the same time I want to pull my hair out because I can’t understand if my students are saying something they REALLY shouldn’t. It’s a balancing act for sure.

I really adore my fellow black sheep. Chile may be alike to the United States and have a troubled past, but the country still maintains a beautiful, warm culture with shared values for the environment and indigenous people. No matter how hard other powers tried to change this country for profit, the people remain some of the most welcoming I’ve come to know (except, I’m also a white female from the United States so that’s probably why I can say this so confidently).

Chile has its thorns just as any rose would, but it’s still a rose nonetheless. 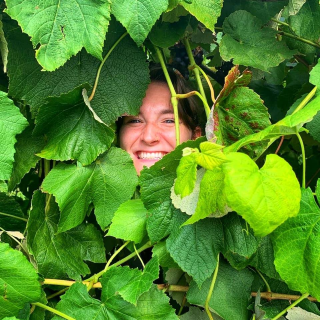 It's All Good Vegan
The Entertaining Anthropologist

The latest news on WordPress.com and the WordPress community.